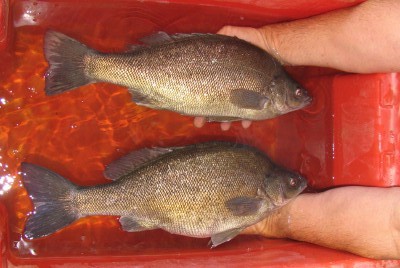 In 1998 the CSIRO completed a study on the beneficial oils that are found in Australian fish. The results of this study will give a real boost to the marketing of Silver Perch. Most of us have known that Silver Perch contain a high level of omega-3 fatty acids. What we did not know was how this compared to other sea-foods and aquaculture products. Well the news could not have been better, when compared with around 200 other products in this category Silver Perch come in a very good third. Now all we need is a few hundred ton to sell to all the people who want to live longer.

Number one was the Swordfish, the one the game fisherman go after. Not much chance we’ll have too much competition from this one! This fish has a massive 1,667 milligrams of the good oil to every 100 grams.

Number two is the Atlantic Salmon. This is the same one that’s being farmed in South Australia. The product is usually targeted at the Asian market, particularly Japan. In my option no real competition will come from this area as the overseas markets usually bring prices that would make the domestic market look like a poor hobby! This fish has 842 milligrams per 100 grams.

Now we get to the real "good oil" Silver Perch. Easy to farm, easy to handle, easy to... well you know that stuff already. But what about this omega-3 oil business? Well the CSIRO study has revealed that our very own Silver Perch has 792 milligrams per 100 grams of the "good oil."

Yes that is very high indeed, lets compare this with a few of our competitive products. These are figures from the CSIRO study that will show just how well Silver Perch compares. What about the good old Rainbow Trout, been farmed for a long time in Australian, but only 448 mg/100g, a big drop from Silver Perch. The Brown Trout has even less at only 415mg/100g. There’s been a lot of interest in our slippery friends the Eels, but not much of this omega-3 stuff, 313mg/100g. Now our real competition might well come from our friends in the Barramundi grow-out business. But not if omega-3 is used as a marketing tool! Barra grown in freshwater have 206mg/100g, and Barra grown in sea water have 150mg/100g.

Not even alternative products such as chicken, beef and   lamb have anywhere near the levels of omega-3. Silver Perch has 10 to 100 times more omega-3 than these more traditional food products. While we are on the subject of the more traditional meats, did you know your local butcher can sell your Silver Perch as an alternative product. With a few minor requirements he is able to sell Silver Perch from your farm. (check with health dept. and local council)

What about this stuff (omega-3) anyway? What’s so good about it? Well it seems it really can help you live longer. It has benefits to human blood vessels, helps protect against heart rhythm disorders, may even help protect against some forms of cancer, (wish I knew that before). But the list goes on, infants brain and retina function and development my also benefit, as well as reduce coronary heart disease, high blood pressure and rheumatoid arthritis. Silver Perch also contains lower levels of cholesterol than chicken, beef and lamb!

Here are some quotes from the CSIRO:

"the unique nutritional benefits of marine oils come from the effects of their long chain omega-3 polyunsaturated fatty acids, and particularly DHA and EPA.

"the body can only make small amounts of these fatty acids. and therefore we rely on dietary sources...

"Other beneficial oils present in seafood (a term which includes farmed fish ...) include omega-6AA which is important for growth and seems to play a role in our general good health and well-being."

IF SILVER PERCH WAS A PILL IT WOULD BE WORTH MORE THAN VIAGRA!

Omega 3 found in the Silver Perch...

Reduces Aggression You are less likely to express stress-induced aggression if your brain is under the influence of fish oil, according to Japanese researchers. In a new double-blind test of 41 adult students, those taking 1.5 to 1.8 daily grams of DHA fish oil for three months did not become more socially aggressive at a time of severe mental stress: final exams. In contrast, students taking a dummy look-alike capsule showed significant jumps in social aggression, as measured by psychological tests. This effect on stress may help explain how fish oil prevents heart disease. Stress hormones triggered by hostility and anger can constrict arteries and accelerate the formation of blockages, research shows; fish oil may suppress the release of those hormones.

Blunts Brain Damage? Fish oil may eventually be proved to lessen alcohol-induced brain damage, Salem says. He explains that excessive alcohol depletes brain levels of omega-3's -- DHA in particular -- which leads to neurological damage and impaired vision. He put experimental animals on high-alcohol, low omega-3 diets for six months to three years. They suffered severe losses of DHA in brain cells and detrimental changes in brain functioning. Some scientists speculate that fish oil also may have a protective role in degenerative brain diseases leading to memory loss and dementia. The brains of deceased Alzheimer's sufferers, for example, show low levels of omega-3 fats.

(Re printed from: AAQ Newsletter December 1998 and March 1999 by, Bruce Sambell)