You are here: Home | Rod Cheetham

Rod Cheetham (B.Ed. Env. Sci) Principal Consultant for Fisheries & Wildlife Developments
Rod and his family have lived in Kingaroy in SE Queensland since 1997.

Originally from Victoria, where he spent 15 years at the State Fish Hatchery at Snobs Creek,
where he was responsible for setting up the Visitor Centre with world class freshwater aquarium
displays. Here he gained a sound knowledge of trout in natural and aquaculture situations, and
native fish breeding research. He was also responsible for the day to day running the Visitor
Centre.
Since becoming a Queenslander in 1997 he has assisted many prospective and existing
aquaculturalists in refining their decisions and operations.
He came to Queensland to take up the position of Fisheries and Aquaculture Extension Officer,
based in Kingaroy. While based in Kingaroy he became heavily involved with the Queensland
Fisheries Service, DPI Freshwater Fish Restocking program. This exposed him to all the
hatcheries in S.E. Queensland, resulting in his now intimate knowledge of this sector.

Rod has had a long history with the AAQ, including regular cooking demonstrations at functions
such as the Toowoomba AgShow, where a cooperative effort between the Fisheries section of
the then DPI, and perch growers promoted the health benefits of silver perch, as well as active
involvement with AAQ workshops and the annual conferences. In 2003 Rod was awarded the
converted AAQ Carson Award. This is an industry award given to people who have made an
outstanding contribution to freshwater finfish aquaculture.

More recently Rod, as an Aquaculture Consultant, has been appointed the auditor for the AAQ
Commercial Hatchery Code of Best Practice. Rod is also the consultant the AAQ used for any issues concerning Government Authorities. 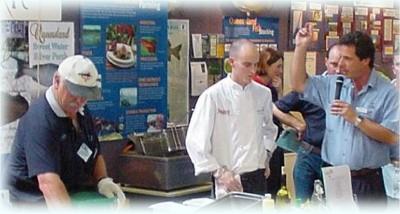